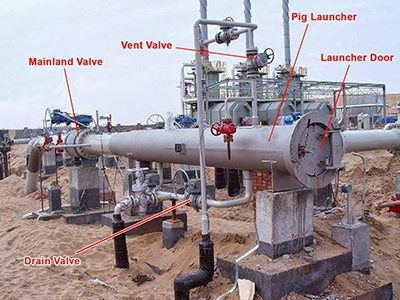 Pigging can be used for almost any section of the pipeline transfer process including blending, storage, or filling systems.

Pigging refers to the practice of using devices known as “pigs” to perform various maintenance operations such as cleaning and inspecting on a pipeline which is done without stopping the flow of the product in the pipeline.

Pigging has been used for many years to clean large diameter pipelines in the oil industry. Today, however, the use of smaller diameter pigging systems is now increasing.

In many continuous and batch process plants, plant operators search for increased efficiencies and reduced costs.

Pigging can be used for almost any section of the pipeline transfer process including blending, storage, or filling systems. Pigging systems are already installed in industries handling products as diverse as lubricating oils, paints, chemicals, toiletries, cosmetics, and foodstuffs.

Pigs are used in lube oil or paint blending to clean the pipes avoiding cross-contamination, and to empty the pipes into the product tanks (or sometimes to send a com-ponent back to its tank). Usually, pigging is done at the beginning and at the end of each batch, although it can also be done in the midst of a batch when producing a premix that will be used as an intermediate component.

There are also ‘smart pigs’ used to inspect pipelines for the purpose of preventing leaks that can be explosive and dangerous to the environment. They usually do not interrupt production; however, some product can be lost when the pig is extracted.

They can also be used to separate different products in a multiproduct pipeline. If the pipeline contains butterfly valves, or reduced port ball valves, the pipeline cannot be pigged.

Full port (or full bore) ball valves cause no problems because the inside diameter of the ball is the same as that of the pipe.

When gas pipelines are pigged, the cleaning action of the pig commonly removes two contaminants that are called “pipe rouge”, which is a waxy, gooey substance, and a fine char-like substance called “black powder”. These substances by nature often get into the spaces and crevices of the valve seats and cavity of the pig launch system valves and can make them difficult to operate and provide tight shut-off.

The full port QuadroSphere Ball Valve from Val-Matic Valve & Mfg. with its self-cleaning and self-flushing actions is said to be an excellent valve for pig launching and receiving systems because of its ability to deal with the debris, waxes, pipeline rouge, and black powder that are produced as a direct result of the pigging operation.

This ball valve has proven itself at several major oil and gas pipeline company locations, according to Val-Matic. Pig Launching and Receiving Systems are often times manufactured as skid assemblies by OEMs, while most of the larger systems are built by the pipeline companies on-site.

We should be on the look-out for applications in and around the pig launchers and receivers, and for use on the main pipeline as drain and vent valves, all of which must handle scale, waxes, and debris.

This application story was contributed by Val-Matic Valve & Mfg.