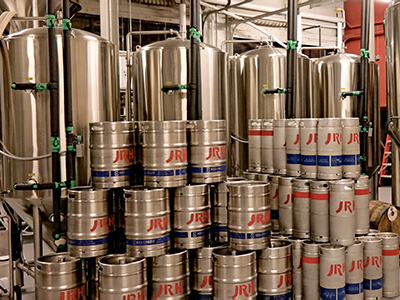 JRH Brewing brew house in Johnson City, Tennessee, can produce 10 barrels, or 310 gallons, of beer at a time.

Soon after completing a Guild Craftsbrewer Apprenticeship program, John Henritze opened a brew pub and brewery, including a 48-seat tasting room that offers six different beers, among them stouts, IPAs, and pale ales, plus many more seasonal ones. He cans his biggest seller, Tree Streets Pale Ale, for a distribution to a growing local fan base.

The 5,000 square-foot JRH Brewing brew house in Johnson City, Tennessee, can produce 10 barrels, or 310 gallons, of beer at a time. The operation consists of four 10-barrel fermenters, one 30-barrel fermenter, and a 30-barrel brite tank. The latter is used to clear and condition beer, including carbonation, before packaging in either kegs or cans. Canning of the Tree Streets Pale Ale is outsourced to a mobile canning unit that comes to the brew house when needed. “From the day we brew our beer to the day it’s packaged takes about a month,” Henritze says.

Henritze had bought the brew house equipment for his operation as a turn-key package from an OEM in Virginia, and learned that its design, especially most of its manual controls, were not located within easy reach. Brewing days became workouts needing his running shoes. “When I first bought the brew house there were things that I immediately noticed weren’t optimal with the process,” he says. “Most all the hand valves are located far away from the brewing platform, mainly because that’s just where they were put.” 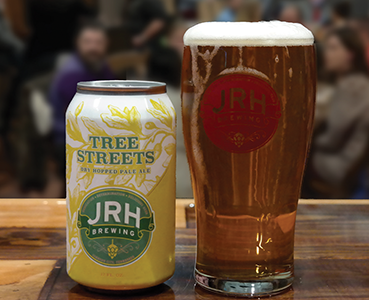 Canning of the Tree Streets Pale Ale is outsourced to a mobile canning unit that comes to the brew house when needed.

If all his back and forth running between gauges, valves, and controls wasn’t enough of a problem, Henritze found precision to be an issue, too. “I’d be running the pumps between tanks, then running down steps to reading the temperatures, which have to be managed precisely,” he says. The result was inconsistent liquid transfers with temperature variations that would affect the quality of the end brew product.

“If the temperature crept up, I’d have to run back over to the platform, run up the steps, slightly adjust the knob and then run back down to the temperature gauge,” he says. “It was like an old TV comedy, but I’d rather not have the workout and be able to focus more on making great beer.”

Fortunately, one of Henritze’s best customers was a Siemens automation engineer with whom he happened to mention his brewing issues. Given the engineer’s intimate knowledge of the Siemens industrial automation and control capabilities, it became obvious that JRH Brewing’s operations would make an ideal application for a Simatic solution.

Automating the process required the engineer to learn the details and the steps Henritze takes — literally and figuratively — while brewing beer. This included a walk-through of the brewery. At the conclusion of this discovery process, he designed a control system consisting of three primary components. 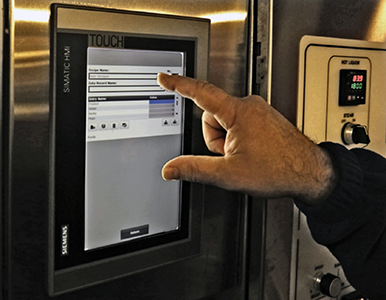 Siemens Simatic TP700 Comfort Panel human-machine interface (HMI). With a 7 in. diagonal touchscreen, this HMI panel features 16 million high-resolution colours. It provides a visual process diagram and dashboard for Henritze to see and interact with any stage of his brewing operation. It uses Siemens Simatic WinCC Basic software to enable a small SCADA (Supervisory Control and Data Acquisition) system to be deployed across the brewery equipment.

This is a general-purpose vector drive that controls the two-horsepower, centrifugal pumps used to transfer wort and other liquids between tanks and pots. A 200 V model was deployed.

The components communicate with each other using Profinet industrial Ethernet. The system was programmed in just two days using the Siemens Simatic TIA Portal.

With the automation and control system in place, JRH Brewing has increased the productivity and efficiency of its operations manyfold, Henritze reports. “When we first tried it out, I was just amazed,” he recalls. “I could literally just stand there and push the button to get the pumps going to start the transfer. I don’t have to run up and down steps anymore. It’s fantastic.”

Henritze figures that eliminating his physical back-and-forth meter readings and manual valve adjustments has cut his time on the brewhouse platform by more than 50 percent. “Before, for example, transferring the contents of a 10-barrel tank took about 30 minutes because I’d have to slow things down to do the temperature readings,” he says. “And at times I’d run out of cold water just trying to get the transfer done because the process was so variable. Now, I don’t have that issue at all.” 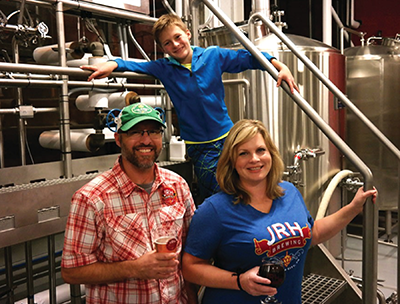 John and Jill Henrtize with son Fletcher on floor of JRH Brewing operations.

Henritze reports also being amazed at the new levels of precision he now has in his brewing operations, too. “I’ve been able to reduce the variability in my brewing processes by about 80 percent,” he says. “That has helped me ensure the repeatability of my brewing processes, which in turn, assures that I can deliver the highest quality possible in my end products.”

“The Siemens system has made a phenomenal difference in our operations and business.”

This article was contributed by Siemens Corp. Visit Siemens Canada.