In 2019, CoorsTek opened its Center for Advanced Materials (CCAM) in Golden, CO. It combines a research and development hub, an analytical laboratory, and a materials manufacturing facility. CCAM’s mission is to accelerate production of commercial ceramics using the latest technologies.

Its manufacturing side is dedicated to handling alumina (aluminum oxide, Al2O3), which rates 9 on the Mohs hardness scale, just below diamond. “It’s extremely abrasive,” says Andrew Harm, CoorsTek process engineer, who led the commissioning of CCAM’s eight pneumatic conveying systems. These dilute-phase lines were built to transport the alumina between operations, from railcar unloading to mixing, milling, spray drying, and storage. The conveying systems’ elbows were unfortunately no match for the abrasive alumina. 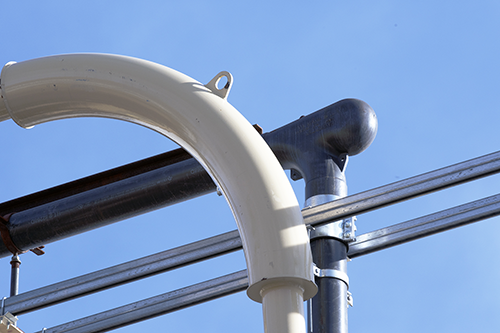 CoorsTek has replaced most of its double-wall sweep elbows (foreground) with Smart Elbow deflection elbows (rear).

“I don’t think it was communicated clearly how abrasive our materials are,” Harm says. “They very quickly started poking holes in the elbows.” In some cases, the elbows failed after handling only 20,000 to 30,000 lb of alumina. “Our batch size is 100,000 lb, so it was a substantial issue for us.”

In addition to downtime, premature wear caused product contamination with as much as 150 ppm of magnetic iron emanating from pipeline and elbow wear. “We care about iron in our material, especially our materials that go to the semiconductor industry and for defense,” Harm says. “The chemistry and purity are extremely important.”

The ceramic linings of the original elbows had a Mohs hardness of just 5 to 6. As those wore through, Harm and his staff experimented with other types of elbows. The most effective proved to be Smart Elbow deflection elbows from HammerTek Corp. (shown at top).

These specialty bends have a spherical vortex chamber protruding from the inlet leg. As material enters the bend, a portion of the flow is diverted automatically into the vortex chamber, where it forms a loosely packed mass that slowly rotates in the direction of flow. This gently deflects incoming particles around the bend. Because some material continuously filters out of the chamber as new material enters, the rotating ball of material is continuously replenished. In addition, the material exits evenly across the outflow of the elbow without skidding along the outside radius as occurs with sweep elbows.

Although the deflection elbows are more expensive initially than other styles Harm tried, such as blind-tees, they reduced costs and improved quality. “We get very little wear from the deflection elbows, so we’re not wearing off that metal into our product. That by itself is enough for us to justify the cost.” Eliminating the blowouts, the mess, and unscheduled downtime was a bonus. “We can make the case from a purely manufacturing standpoint, too,” Harm says.

CoorsTek initially installed the deflection elbows in phases after it commissioned each conveying system, and the original sweeps wore out. “We did that with a couple of systems, but by the time we started running the fifth or sixth system, we went whole hog,” Harm says. 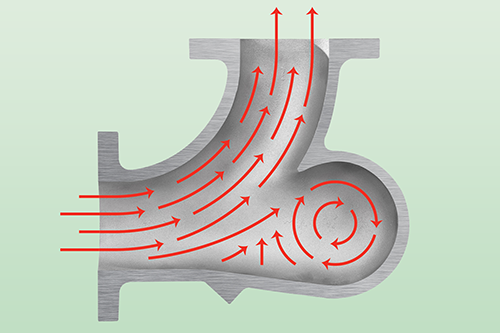 A spherical vortex chamber protruding from the deflection elbow causes a loose ball of ceramic material to rotate in the same direction as the airstream that powers it, deflecting particles around the bend without impacting or wearing the elbow wall.

“Waiting [for a blowout] was causing too much unplanned downtime. If you already have the part on hand and plan for it, changeout time is minimal, maybe half an hour.”

Replacing difficult-to-access elbows, however, takes more time and planning. The most difficult were the elbows atop CCAM’s 90 ft tall outdoor silos. It took two days and required hiring a crane and building special scaffolding, but there was no alternative, Harm says. “We can’t be blowing our material out to the open.”

Those were the last of the 65 Smart Elbow bends that CoorsTek installed. Some of the bends are cast iron, but most are made from HammerTek’s HammerLoy, a more abrasion-resistant material.

In addition to preventing contamination and blowouts, the deflection elbows reduced pressure drop. “With the blind-tee elbows, we get 0.2 to 0.3 psi pressure drop across the elbow itself. With the HammerTek elbows, we get about 0.1 psi drop,” Harm says.

“That’s a pretty significant difference. If we used four or five of those other elbows, it could mean a 20 percent pressure drop just across the elbows. It could drop the rate enough that we couldn’t send material through.” 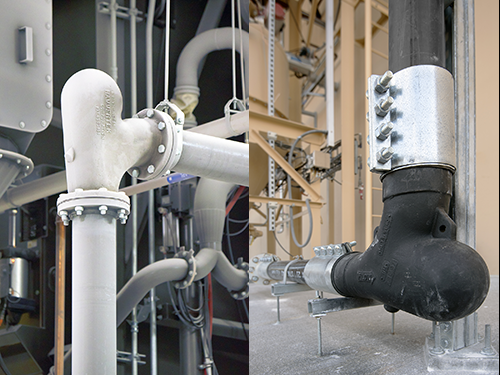 CoorsTek’s eight pneumatic conveying lines run between 80 and 300 ft long and 4, 5, and 6-in. diameters. They transport alumina from railcar unloading to mixing, milling, spray drying and storage.

The oldest of the HammerTek elbows, installed two years ago, continues to perform. In noncritical areas, CoorsTek still has some blind-tees and sweeps with double-wall construction.

“If we can get away without replacing them, great,” Harm says. “But the first time one of those fails, we’ll go ahead and swap those out as well.”

Related
Additive manufacturing sector gets a boost with new centre
Biting off more than you can chew
Toyota’s Cambridge plant tapped for Lexus NX, NX Hybrid
Finding a competitive edge while removing the drudgery