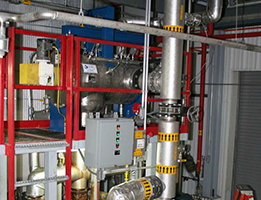 Fluid Engineering has been designing, manufacturing and selling strainers and filters to the corn ethanol industry since early 2001 for many applications. In early 2006, Fluid Engineering was challenged by a large engineering firm to design and manufacture a slurry strainer in a fully automated concept. 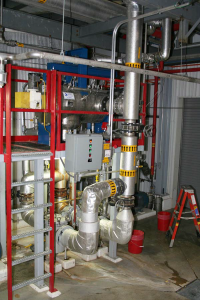 The corn slurry system was refined through a year of research and working with the customer.

With the slurry strainer being automated, the manual slurry strainer would be used for by-pass purposes and reduce the labour hours that were spent in the past. With the automation of the “slurry strainer”, labour costs have been realized and with less handling of the hot process, a safer environment was created.

Out of this challenge, the Model 763 Automatic Slurry Mixer Strainer was created (patent pending). The first six Model 763 Strainers were sold as labour saving devices. They were designed with the “OUT TO IN FLOW” with a rotary screen and a specially designed cutter blade to break up clumps and remove particles larger than the screen opening by way of the blow off process.

Through a year of research and working with a creative and pro-activate customer, it was found that the screen, with the design of the internal bars, created a slow-motion tumbling effect. The internal bars were originally inserted in our design as stabilizer bars for the straining element. The straining element, rotating continuously, now performs as a natural tumbler/mixer giving the Model 763 a more uniform blend of corn mash. The mixing action occurs as the mash on the bottom of the screen is picked up and tumbled to the top of the liquid. This separation is due to the natural occurrence of materials because of the density of each component. Therefore, the mixing action gives a more improved homogenous consistency flowing out of the strainer.

By removing all of the large clumps and any large corn particles by the strainer/scraper and the mixing action by the screen tumbler section, there is now a more homogenous mixture of mash as stated above. The pilot customer, after installing the Model 763, has experienced the homogenous mixture and has been afforded the opportunity to adjust their dwell time. I has the flexibility to adjust their enzyme rates that adds to the savings already realized. With the reduction of labor and enzyme usage, a short payback period ranges from less than one year and up to two years depending upon the size of the plant. 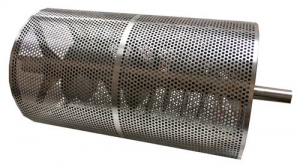 After another year of research discovery of necessary changes were required – such as improving the flow pattern, opening the porting areas to reduce turbulence in the flow. To improve and assist in flow movement out of the Model 763, an auger was designed and incorporated into this design.

Research was also completed on the balancing of the straining element and drive shaft. After much analysis, it was decided to add additional cutter blades to balance the in-balance stresses imposed on the shaft (patent pending). The slurry process also developed a challenge with the corn oil leakage that would occur. This now led to the design and incorporation of the Fluid Engineering Radial Seal (patent pending).

The Fluid Engineering Research and Development team started to look at the possible operating cycles. By witnessing first-hand, the procedure that our Ethanol client experiences in the cleaning process, the company began to look at and design the spray nozzle assembly and developing the semiautomatic and fully automatic designs. Illustrations of the designs are shown below.

Process data is dependent upon the size of the plant, the quality of the process (corn, etc.), the amount of equipment and the experience of the plant manager. Over the past year, Fluid Engineering has worked with an existing 40 million gallon/year ethanol plant to do a pilot study on the Model 763. The original set of data was based on using the Fluid Engineering Model 107/108 simplex strainers. The given data was a flow of 600 gpm and using 140 ml/m (ml/m = millilitre/minute) of enzymes. 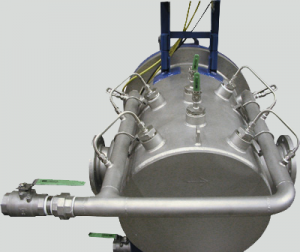 Then the Model 763 was installed, and the process flow had been increased this past year to 730 gpm. With the flow of 730 gpm, the system was able to cut the enzyme levels to 70 ml/m. As part of this increase, the plant is now running the process at a differential pressure of 12 to 14 psid that is believed to have increased the efficiency of the enzymes. The plant is now producing at 55 million gallon/year, a 37.5% increase. Besides the addition of the 763, there were additional process equipment and fermentation tanks installed.

Fluid Engineering is represented in Canada through Wajax.