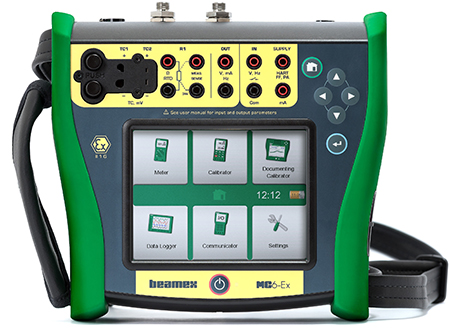 First, we look at some fundamental considerations, theory and history. Then we look at different techniques to make calibration equipment suitable for an Ex area.

What is a hazardous area?

Play video for a demonstration. 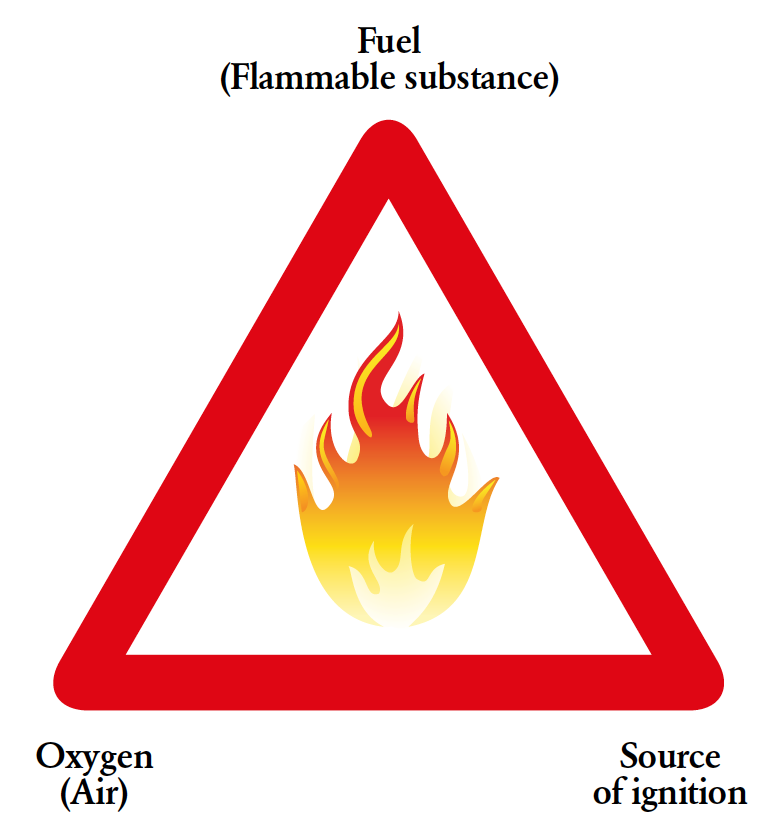 In such a hazardous area, an explosion or fire is possible if all three conditions of the “Explosion Triangle” are met. These three conditions are fuel (a flammable substance), source of ignition (or heat) and oxygen (air).

The situation is often presented as a triangle; hence the name Explosion Triangle.

Eliminating one element from the explosion triangle

Keeping in mind the Explosion Triangle, we can conclude that one or more of the three elements must be eliminated, to make it safe. Many times, in an industrial application eliminating the flammable substance is not possible (you can’t eliminate fuel in a refinery), and therefore the oxygen (air) or source of ignition has to be eliminated.

However, it is also often very impractical or impossible to eliminate air. Therefore, the most practical solution is to eliminate the source of ignition, being spark or heat.

In the case of electrical calibration equipment, the device can be specially designed, so that it can be used safely in hazardous areas. There are many ways to design electrical equipment suitable for hazardous areas and this topic will be discussed later.

Calibration equipment is often designed in such a way that it cannot provide enough energy to cause the source of ignition, spark or heat.

Some of the first hazardous areas were discovered in early coal mines. Being flammable substances, both the coal dust and the methane absorbed created a hazardous area. The lighting in early mines was produced by candles and torches, generating a source of ignition. 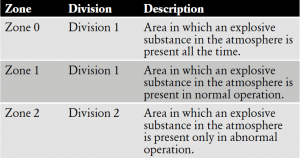 This was the first “intrinsically safe” electrical equipment and it led the way to the standards compiled for equipment used in hazardous areas today.

Since a flammable substance may be a liquid, gas, vapour or dust, there are surprisingly many different industries that may have some areas in the plant where these substances may be present during the normal operation or during shut-down. Even some seemingly safe industries may have hazardous areas.

In plants, all areas classified as hazardous should be clearly marked with the Ex logo:

What are flammable and combustible liquids? Generally speaking, they are liquids that can burn. They may be gasoline, diesel fuel, solvents, cleaners, paints, chemicals, etc. Some of these liquids are present in many workplaces.

Flashpoint is the lowest temperature of a liquid at which it produces sufficient vapor to form an ignitable mixture with air. With a spark or enough heat, it will ignite.

Based on their flashpoint, liquids are classified as flammable or combustible. Flammable liquids may ignite at normal working temperatures, while combustible liquids burn at higher temperatures. Often 100 °F (37.8 °C) is considered as the temperature limit.

Some examples of flashpoints and autoignition temperatures: 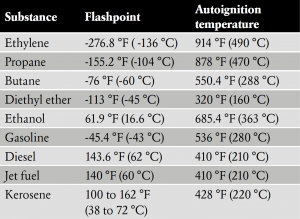 As mentioned earlier, to prevent an explosion, one of the three elements of the Explosion Triangle should be eliminated. In practice, eliminating the source of ignition would be the most sensible. There are various techniques in electrical equipment that make them safer for use in hazardous areas. 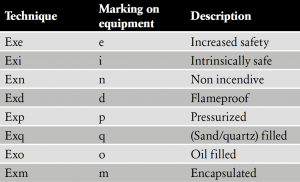 Inside an Exi device, the Exm (“Encapsulated”) technique may also be used for certain parts of the equipment (as in a battery pack).

Using non-Ex calibration equipment in a hazardous area may be possible, but it requires special approval from the safety personnel in the factory. Oftentimes, this also involves the use of safety devices, such as personal portable gas detectors, to be carried in the field while working.

The international standard family of IEC 600779 defines the different standards for related regulations.

The IECEx scheme involves international cooperation based on the IEC standards. The objective of the IECEx system is to facilitate international trade in equipment and services for use in explosive atmospheres, while maintaining the required level of safety. Today, there are approximately 30-member countries in the IECEx, including Canada and the U.S.

The ATEX directive was introduced to unify hazardous equipment and work environments with the European Union. It was established about 10 years ago and is based on the directives of the 1990s.