To prevent groundwater from entering underground mines, the ground adjacent to the mining zone needs to be frozen. To create this freezing effect, ammonia refrigeration chillers were used as part of the process to increase uranium production at a uranium mine in Saskatchewan.

The challenge, however, was ensuring accurate readings of ammonia levels.

These chillers used glass gauges in which ammonia tends to flash inside –due to external temperatures the liquid ammonia warms up to its critical boiling point and creates entrained gases that gather under the float level. When this flash effect occurs, it causes inaccurate readings and creates potential risk to personnel safety and damage to equipment. 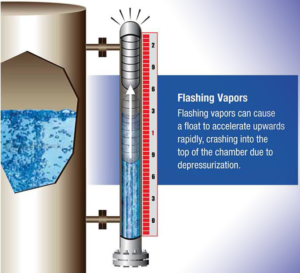 With the increased production of uranium, the client now had an additional three chillers – each of which had three gauges — that needed to be monitored regularly. The client needed a way to monitor and control ammonia levels accurately.

Wajax proposed a customized solution to help avoid this flash effect, which included implementing Jerguson FlashProof Magnicator level gauges (see video above). In addition to preventing flash, these gauges are also designed with key features and functions to include cold insulation, frost proof indicators, and oversized chambers to prevent dirt buildup from blocking the level and causing further inaccuracies in readings.

The upgraded system not only resolved the flash effect issue within the chillers, but also provided a highly reliable gauge to mitigate the risk of ammonia gas leakage. This enabled the client to address the safety concerns while also enhancing operational performance.

This client case study was provided by Wajax.