The planned terminal in Brunsbüttel (Germany) will be built for the import and redistribution of LNG. It will have two LNG tanks with a capacity of 165,000 m³ each and an LNG regasification plant. Under today's conditions, it is realistic to expect completion in 2026. Photo: German LNG Terminal GmbH

LNG has been delivering gas for years and is currently experiencing a strong boom, since the conflict with Russia leads to a greater diversification of energy in the western industrialised countries. Liquefied petroleum gas will play a key role as a new bearer of hope — and fittings will play a leading role.

A new era began in February 2022. “Russia’s unprovoked attack on Ukraine is above all a humanitarian disaster, but it has also triggered a major energy supply and security crisis,” said Keisuke Sadamori, director for Energy Markets and Security at the International Energy Agency (IEA). The fear of a gas shortage is spreading in the industrialized countries, and LNG is supposed to alleviate it.

According to ICIS LNG edge, Global LNG Hub, European imports of liquefied natural gas reached a record monthly level of at least 8.1 million tonnes as early as January 2022. There are a total of 37 LNG terminals in Europe, 26 of which are in the EU. Throughout Europe, there is a regasification capacity of around 243.6 billion cubic metres per year.

After the war in Ukraine started, another 20 LNG projects are now being pushed forward – new records in LNG imports are foreseeable. Two import terminals for liquefied natural gas are planned for Germany, for instance. According to the Federal Ministry for Economic Affairs and Climate Protection, they could cover up to 20 percent of the annual gas consumption in Germany. The terminals and corresponding production facilities shall also contribute to security of supply — but require high investments, which also flow into crucial components such as fittings and drives.

Herose, for example, has long focused on the emerging LNG sector – and, according to the company’s findings, it is gaining in importance. However, liquefied petroleum gas fittings must meet stringent requirements in order for companies to be successful. 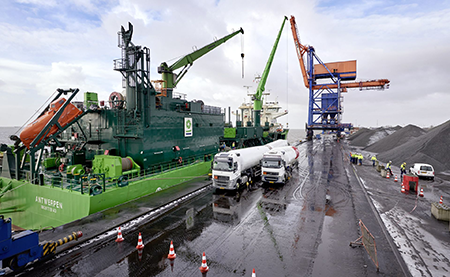 Nauticor in Brunsbüttel refuelling the Scheldt River with LNG ships – the experts from Nauticor, an LNG provider for ships, use a process that has already been successfully used several times during refuelling. In this process a ship is refuelled in parallel from two LNG tankers and the refuelling process is thus considerably accelerated. © Brunsbüttel Ports GmbH

“Transport vehicles for cryogenic liquefied natural gas are exposed to the greatest loads due to frequent filling, transport and unloading at the destination,” explains Herose. In addition, service life and work performance as well as safety and reliability are central to the LNG storage. Powerful fittings would also be required for refuelling with LNG.

Emerson also has an eye on the LNG market. The company provides automation and control solutions for gas production, liquefaction plants, transport, regasification terminals and pipelines and wants to “contribute to more energy efficiency, reduced emissions, a higher production and use of renewable energies and cleaner fuels”, emphasizes Emerson Automation Solutions. The company develops automated valves for cryogenic use.

The fittings of the müller co-ax ag are used, for example, in ship propulsion and in the re-liquefaction on LNG tankers. The conditions at LNG are challenging. This is because the natural gas becomes liquid at a temperature of approx. -162°C. In addition, high safety requirements are imposed — when the LNG evaporates, an explosive gas is produced. “Our valves meet the explosion protection guidelines and are ATEX certified,” the company explains. 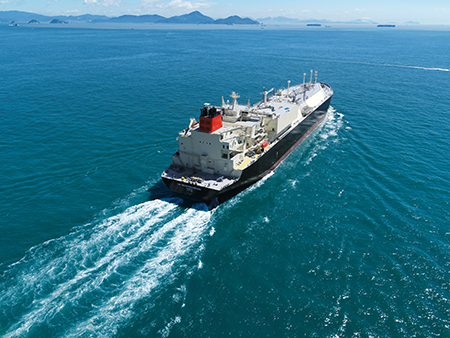 LNG would also be more readily available as an alternative fuel for shipping, trucks, and rail. Ultimately, this pathway is “a transitional technology, but also an enabler, for example, for the application of synthetic LNG,” says Herose. This is because a terminal can also be used as a transfer point or storage location for synthetic natural gas, such as power-to-gas.

“The existing infrastructure could store and distribute significant amounts of wind energy via the natural gas detour. A fossil energy source becomes climate-neutral”, the company says. Carbon in methane would be extracted from the environment during the synthesis of hydrogen. “No more CO₂ is released into the atmosphere from fossil reservoirs. Natural gas lines and storage tanks are already there, no new high-voltage lines are necessary.”

Essential for LNG systems are safety valves, which, for example, are produced by LESER. The company emphasizes the crucial importance of these valves since with LNG, natural gas is cooled to -162°C and liquefied. However, overpressures arise due to heating and need safeguarding. “Across the entire supply chain, there are different requirements for overpressure safeguarding, which must be covered by suitable safety valve designs — for example, compact threaded valves or technologically challenging pilot-controlled safety valves,” explains LESER. It is necessary to address the needs and requirements of the individual process steps of the LNG industry and, if necessary, to further develop products.

Safety, control, and shut-off valves in the valve industry are therefore urgently needed for the booming LNG. The European market is broadly based here – far from any dependency. And with its quality products, it is ready for the massive investment offensive in the energy sector and in particular in LNG plants. A development that will pay off for the valve companies.

From November 29 to December 1, 2022, the key players of the industrial valves sector will present themselves at article contributor Valve World Expo with an accompanying conference in Düsseldorf. Experts from all over the world will use the Düsseldorf Fairgrounds as an international fittings summit to present their innovations and discuss current research and production processes.

Related
Increase in demand for smart pumps has focus on IIoT and Big Data Analytics
What Made-in-China 2025 means for petrochemicals and chemicals
Transforming animal by-products, food waste into fertilizer and green energy
Is it time to upgrade your old energy-wasting conveyor systems?