More than $200 billion is expected to be invested in U.S. petrochemicals as the region becomes an energy exporter, according to Petrochemical Update (all figures US$).

“In capital expenditure terms, this equates to over $200 billion – signaling a huge increase in optimism within the industry. Most of these chemical investments have utilized gas-based chemistries and feedstocks, such as methane, ethane, propane and butane,” Zinger said.

The impact process engineering teams have on North America’s rapid energy growth is far from over.

Rapid infrastructure development is likely to continue for a prolonged period of time, according to a study by the American Petroleum Institute (API). 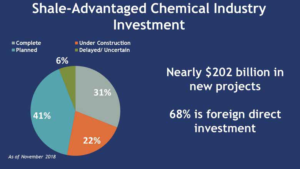 “Drivers for robust development are still in place – shale and tight resource development is likely to continue in earnest, and markets will grow in response to the relatively low commodity prices that are being fostered by new oil and gas supplies,” according to the API.

In its paper “U.S. Oil and Gas Infrastructure Investment through 2035,” the group predicts that total capital expenditures (CAPEX) for oil and gas infrastructure development will range from $1.06 to $1.34 trillion from 2017 through 2035. These levels of investment equate to an average annual CAPEX ranging from $56 to $71 billion throughout the projection.

This includes investments in new as well as existing infrastructure for the following categories: a) Surface and Lease Equipment; b) Gathering and Processing Facilities; c) Oil, Gas, and NGL Pipelines; d) Oil and Gas Storage Facilities; e) Refineries and Oil Products Pipelines; and f) Export Terminals.

Challenges abound for the process engineering sector as a result of North America’s sustained petrochemical and energy growth. 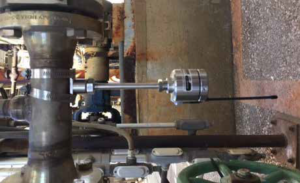 A decade or so ago, refining was the big dog and petrochemicals was the tail of the dog. The money was in crude oil and refined products.

Refined products include gasoline, jet fuel, and diesel. Transportation fuels such as gasoline and diesel are at the core of most refineries’ product slates and make up the largest share of refined product offtake.

Global refined product demand has experienced an average growth rate of 1.3% annually since 2000, according to IHS Markit.

The outlook for the next decade is less rosy, with demand growth from 2020 to 2030 expected to average only about half the rate of the prior period.

“This slowdown will continue into the 2030s, with absolute demand growth peaking in the latter half of the decade before entering a gradual decline in the 2040s,” according to IHS Markit.

Facing flat or declining market demand for refined products, refiners are bracing for lower sales and profits. In contrast, petrochemicals market demand continues to rise and grow in importance.

In the coming years, several headwinds will pressure growth in transportation fuels further including reduced fuel usage, substituting traditional fuels for electricity or renewables as well as government regulations.

By 2040, IHS Markit expects 9.2 billion inhabitants living and thriving on the planet, an additional 1.6 billion people compared with 2017.

“Even if the petrochemical per-capita consumption rate remains unchanged from 2017 levels, the overall volume of products consumed will increase significantly as a simple consequence of serving more people,” IHS Markit writes.

In addition, as more people move from lower to middle economic classes, a shift in consumer focus will lead to more spending on petrochemical based products including plastics, cosmetics, appliances, mobile devices, electronics and packaging.

How can refiners use growing petrochemical demand to help their businesses survive and thrive? One possible solution the industry will consider over the next few years involves finding new ways to integrate refinery and petrochemical operations.

This article was excerpted from the Petrochemical Update white paper, Process Engineering Trends and Outlook 2019, in conjunction with the Downstream Conference 2019 (June 11-12, 2019, Houston).