A new study from Flow Research, Volume X: The World Market for Flowmeters, 8th Edition, finds that the worldwide flowmeter market is rebounding from a slump that occurred during the height of the coronavirus pandemic.
The flowmeter market is now strong and trending upward as the economy regains its footing and rising oil & gas prices drive exploration and production. Historically, the worldwide flowmeter market size has followed the downward and now sharply upward fluctuations in oil prices.
“As the pandemic declined towards the end of 2021, energy markets faced declining supply along with increased demand. This had a particular effect on the price of oil. Oil prices crossed over $70 per barrel in early December 2021 and have continued to rise since then,” says Dr. Jesse Yoder, president and founder of Flow Research. “In early February 2022, oil prices rose above $90 per barrel. Today with oil prices above $110 per barrel, we are seeing price levels not seen since July 2008. Among all the flowmeter types, expect Coriolis, ultrasonic, and turbine flowmeters to benefit the most from this surge in oil prices. These meters are all approved for custody transfer applications, and the more valuable the commodity being measured, the more companies are willing to pay to measure it accurately and reliably.” 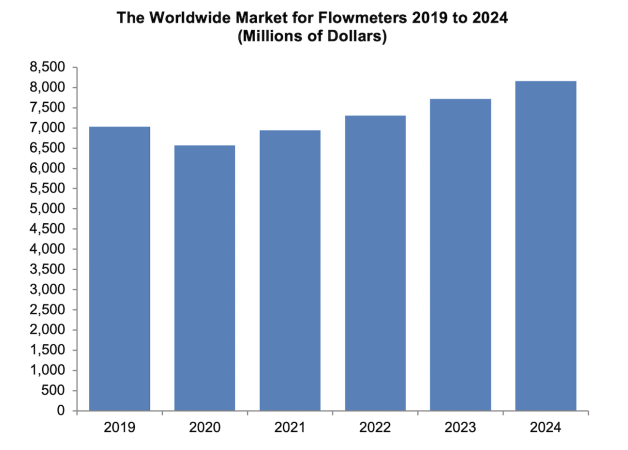 The comprehensive new Flow Research study found that the market totalled $7.03 billion in 2019 and $6.6 billion in 2020, with revenues forecast to reach a projected $6.9 billion in 2021 and $8.2 billion by 2024. Coriolis and magnetic flowmeters are the revenue leaders in the flowmeter market, with Coriolis meters projected to take over the lead more strongly by 2024, due largely to growing demand in the oil and gas industry for more accurate custody transfer. Coriolis flowmeters are the most accurate meters on the market today.
Coriolis, magnetic, and ultrasonic flowmeters drive the total flowmeter market, and the decreased demand and supply of oil and gas during the pandemic significantly affected the Coriolis and ultrasonic markets. Going forward, however, the tightness in supply for both oil and natural gas could cause faster than projected growth in these flowmeter markets.
Magnetic flowmeters are widely used in the water & wastewater industry and are growing in demand as water shortages and climate change intensify the need to monitor water supplies and usage more closely. In fact, thanks to new industry group standards that include using magmeters for water utility measurement, magmeters are now displacing positive displacement and turbine meters in some commercial and industrial applications. Magnetic flowmeters, which do not measure hydrocarbons, are used in the oil & gas industry and were also affected by the slump. Magmeters are used for fracking applications, including measuring water injected into oil and gas wells and water flowing from them for capture, disposal, or recycling.
The ultrasonic flowmeter market is projected to grow the fastest over the next three years.  Ultrasonic flowmeters feature high accuracy, high reliability, high turndown ratios, long service life, low maintenance, relatively low cost, diagnostics, no moving parts, and redundancy. Both Coriolis and ultrasonic flowmeters have received industry association approvals for custody transfer of both gas and liquids, but, unlike Coriolis meters, ultrasonic flowmeters perform very well in the large line sizes often used in oil & gas pipelines.
In general, user requirements for increased accuracy, reliability, and managed network capabilities are causing end-users to switch to new-technology meters in some cases.  However, conventional meters are still a major force in the flowmeter market.  Conventional meters, especially differential pressure, positive displacement, and turbine meters, have a large installed base and were among the first types of flowmeters to receive approvals from industry associations for custody transfer applications.  While many new-technology flowmeters have also received these approvals, the changeover to these new-technology flowmeters is taking time.  Some end users prefer to stay with an existing known technology unless it is no longer doing its job. New-technology flowmeters – meters first introduced after 1950 – include Coriolis, magnetic, ultrasonic, vortex, and thermal flowmeters.  Conventional flowmeters include differential pressure (DP), positive displacement, turbine, open channel, and variable area flowmeters.
In addition to growth factors related to the oil & gas industry, product improvements in both new and conventional flowmeters are contributing to the upward trend in the worldwide market.  Some product improvements include modern materials for meter parts or liners, additional line sizes, increased accuracy, and broader flow ranges.  Suppliers are also making battery-powered units, smaller meter bodies for tight spaces, multivariable meters, and self-monitoring or self-calibrating meters.
Regulatory reporting requirements and the need for continuous measurement without interruption are increasing the value of redundancy in measurement.  Vortex and turbine suppliers have brought out flowmeters with two sensors, and dual flowmeters calibrated together.  New differential pressure flowmeters offer fully integrated orifice plates with multiple transmitters.  Dual turbine rotor designs offer greater turndown flow range along with enhanced accuracy.  Redundancy is rapidly taking its place along with accuracy and reliability as a key feature to look for when selecting a flowmeter.
Market ups and downs
When oil prices began dropping eight years ago and many oil and gas exploration projects were postponed or cancelled, associated instrumentation industries experienced a ripple effect. This downturn especially impacted the Coriolis, ultrasonic, differential pressure, positive displacement, and turbine flowmeter markets, and new-technology flowmeters showed a decline for the first time in many years.
As oil prices began recovering in 2018, the worldwide flowmeter market began to ride the wave and experienced a strong year in 2019. Then the worldwide pandemic hit, causing reduced demand in many industrial markets, including the flowmeter market. The worldwide flowmeter market declined in 2020, and the effects of the pandemic continued in 2021 and into early 2022, but as economic conditions improved significantly in 2021, the worldwide flowmeter market approached the 2019 level and continues on an upward trajectory in 2022.
To provide an accurate picture of the pandemic effect, the study gathered 2019 data as a reference year, combining it with actual data and segmentation from 2020 plus participating companies’ projections for 2021 sales.
Volume X: The World Market for Flowmeters, 8th Edition draws on 29 years of consistent methodology in research by Dr. Yoder, who authored his first worldwide flowmeter study in 1994 for Find/SVP.  Flow Research published its first Volume X study in 2003, followed by editions in 2008, 2010, 2013, 2014, 2017, and 2019. The current edition analyzes 13 flowmeter technologies and 12 flowmeter types.
Volume X contains data and analysis designed for any company concerned with developing strategies and products. It displays in one glance a comparison of the revenues, units sold, and compound annual growth rate for all the main types of flowmeters.  Growth factors and limiting factors for each flowmeter type explain the rationale of the market forecasts and what can be expected over the next three years.  No other study exists that provides this type of all-in-one view of the flowmeter market.  Even companies that sell only one or two types of flowmeters can benefit from learning about the eight or nine other types of flowmeters they are competing against.
For more information, visit www.flowresearch.com