Ideon Technologies, a global pioneer in high-resolution subsurface imaging for the mining industry, announced it closed a US$16 million Series A funding round, led by Playground Global.

The investment will expand Ideon’s production capacity and accelerate the commercialization of its Discovery Platform, an imaging solution for critical mineral discovery.

Ideon Technologies leverages the natural energy generated by supernova explosions in space — in the form of subatomic particles called cosmic-ray muons — to provide x-ray-like visibility up to 1 km (0.6 miles) beneath the Earth’s surface. 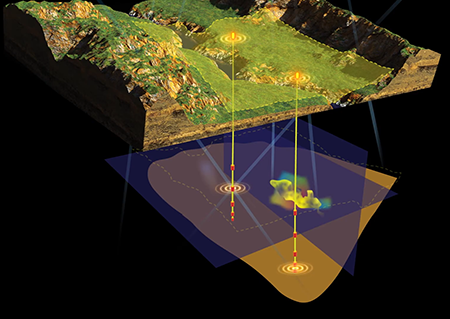 Ideon leverages the natural energy generated by supernova explosions in space — in the form of subatomic particles called cosmic-ray muons — to provide x-ray-like visibility up to 1 km (0.6 miles) beneath the Earth’s surface.

Ideon maps the intensity of muons underground and constructs detailed 3D density profiles of underground anomalies such as mineral and metal deposits, air voids, caves, and other structures. This helps geologists identify mineral and metal deposits with precision and confidence, reducing risk and cost, saving time, and minimizing the environmental impact of exploration.

“Our company mission is to help accelerate the world’s transition to low-impact mining, which we’re achieving by delivering an unprecedented level of geological certainty in an exploration market that has traditionally been dominated by uncertainty,” says Gary Agnew, co-founder and CEO at Ideon. “Today, billion-dollar decisions are being made with just 1 percent of 1 percent of knowledge of the ore body. Our solution gives clients the confidence to identify new discoveries, map and characterize ore bodies in-mine to accelerate resource-to-reserve conversion, and to target high-recovery/low-waste deposits to deliver critical minerals faster, more reliably, and more sustainably than ever before.”