The need for dedicated multiphase metering devices has been steadily increasing as improved oil and gas reservoir management continues around the globe.

A two-inch GLIMS prototype, mainly dedicated to smaller production facilities, is undergoing laboratory testing using the CGIS Flow Loop Facility. GLIMS is one of the newest entrants and it could potentially offer comparable accuracy with other providers of multiphase flow meters (MPFMs) today at significantly reduced CAPEX and OPEX.

For the purposes of this article and to better understand GLIMS’ operating principle, “multiphase flow” refers to mixtures of liquids and gases co-currently flowing through same wellbores. Furthermore, the GLIMS operating principle applies mainly to mixtures of liquids and gas differentiated by two significantly different densities at the metering section.

The liquid “phase” could be a mixture of liquid oil components and formation water, as usually obtained from any oil reservoir, and the gas phase mixtures comprising reservoir gas mixed with gas released from liquids as the pressure of gas-liquid mixture is reduced from the reservoir deep location to the measuring point. For any metering purposes the composition of gas and liquids is known and frequently measured through sampling and subsequent gas chromatography. For the given sample, thermodynamic equilibrium models (such as Peng- Robinson and others) are currently used to indicate the composition and amount of organic and inorganic components expected to be in the liquid and in the gaseous phases for known pressures and temperatures in the multiphase sensor metering zone.

The above statement is correct as long as the flow of gases and liquids are at thermodynamic equilibrium which, for some metering designs, is not sufficiently considered to be an important source of errors.

GLIMS has been considering this aspect in its detailed design and therefore adopted a unique streamlined meter profile. In this way, local release of gaseous phase is almost eliminated, even for extreme operation conditions.

While GLIMS is fully able to indicate the ratio of gas – liquid as GVF and the total flow rate of gas and liquid it will indicate the amount of reservoir water in the liquid mixture, by using an additional, commercially available, “water cut meter.”

The need for multiphase flow meters

Prior to the 1980s, the Oil and Gas industry used conventional metering (turbine, orifice, venturi, coriolis, etc.) calibrated for gas or liquid streams only and positioned on the exit gas or liquid pipes from the test separation tank, located in the gathering station of the oil or gas field. 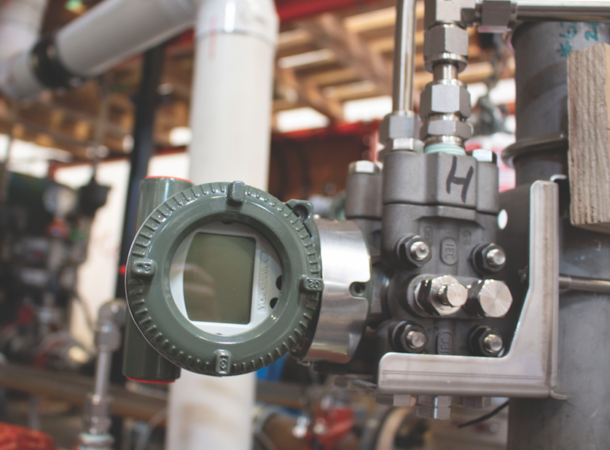 Expensive and cumbersome test separators are a common element in oil and gas facilities where each individual well is measured one at a time using field personnel in order to connect one well at a time.

As an example, for seven wells coming from an oil lease field, the tank separator method is not conducive to continuous metering and monitoring more than a single well, individual well metering occurs only one day a week.

Furthermore, the tank separator method is not able to continuously record production for all seven individual wells and assist in improving the overall reservoir performances; even more challenging is custodial transfer for “allocation” distribution when a lease has many owners. As the well ages and the reservoir’s pressures change, flow rates and phase fractions change, confounding the accuracies needed to manage the production. The health of individual wells cannot be determined unless their production is continuously observed and compared to all other producing wells in the reservoir.

Between 1980 and 2010 a significant effort was made to develop suitable technologies offering real time or momentary data on the amount of oil and gas being produced by each well.

After more than 40 years of effort a small number of technologies are presently available and installed. A 2006 study estimated that nearly 3,000 applications including field allocation, production optimization and mobile well testing are using MPFMs.

Direct evaluation of the gas-liquid distribution is presently performed with the aid of a focused gamma-ray metering (fluid density significantly influences the absorption of gamma rays), high-speed cross-correlation of fluid(s) velocities and overall metering of electrical impedance appears to be among the most promising and tested metering principles used in various combination today1 (see Table 1).

Table 1. Summary of some industrial multiphase meters and GLIMS for quick comparison (ref 1)

Table 1 shows a selected group of MPFM technologies with GLIMS, appended as a new candidate, in order to offer quick comparison criteria. This is not an exhaustive list; various customers may have different opinions how a certain technology is used in a particular location and flow conditions.

GLIMS essentially relies on a relatively simple sensing technology having the ability to count and produce a time-limited statistical interpretation of the strength and duration of electrical impulses that are mainly related to velocity and size of a great number of flowing discrete, dispersed phases (as bubbles carried by the liquid, or droplets carried by gases). For example, using a certain acceleration sensor, conveniently placed in the GLIMS metering area, a number of two million impulses could be obtained and stored during less than a minute of measuring time. The intensity of each impulse depends strongly on the size and velocity of the discrete element. It is essential to realize that the size of a discrete fluid element depends (through the known Kolmogorov-Hinze-Taitel-Barnea model2) on the turbulent dissipated energy of the gas-liquid multiphase stream entering the GLIMS apparatus.

Direct comparison of the GLIMS Acceleration Sensor response with an experimentally obtained “standard” sensor map, adjusted with the aid of the “Physical Model,” produced a viable tool for assessing GLIMS response to broad ranges of pressure-temperature-gas-liquid conditions (such as flow conditions, viscosities, Reynolds number and interfacial tensions), a tool capable to tune GLIMS for specific flow conditions in the metering zone. This considerably reduces or eliminates operating costs related to calibration (see Table 1).

In this way, GLIMS significantly departed from two-phase metering technologies relying on complicated scanning of the gas-liquid flow metering section (e.g. using gamma ray densitometry principle) and, instead, is using an accepted and verified mechanistic model relating transport velocity of gas and liquid and gas concentration (as GVF) in the metering area to the size-distribution of dispersed phase.

How do we know this two-phase flow physical aspect is valid and could be accurately used by GLIMS technology?

The answer to this question has been found by 2000-2001 during intense testing of acceleration sensors completed with the aid of a state-of-the-art multiphase loop (ARC/ATIF, Edmonton), testing described in an Oil and Gas Magazine3 article. Approximately 500 independent tests have been conducted and a certain type of an acceleration sensor has been exposed to a broad range of liquid and gas concentrations (GVF) and to gas-liquid transport velocities from 0-4 m/s (in a one-inch tube!).

Sensor response data have been further analyzed and compared, all using a consistent statistical analysis of the signal received from the acceleration sensor. A very small deviation (less than one per cent) was found for repeatability and a 3D characteristic of the sensor response was developed as:

From this rigorous testing stage to GLIMS design, the team spent several years to consider and address most of the problems found with other technologies such as:

1. Extrapolation of empirical equations beyond initial testing limits of the metering device where the meter accuracy significantly decreases when the initial calibration map limit is not respected;

2. Complex distribution of gas and liquid in the body of the meter;

4. Gas phase being released from the liquid phase and possibly accumulated, (outgassing or “exolution”) taking place under relatively small, local pressure variations in the meter body; while the Liquid-Gas perfect equilibrium conditions are difficult to be achieved; a streamlined design including a fixed cage and a rigorously, axially-displaced plug indicated as “flow conditioning system” are adapting the GLIMS metering to a broad range of inflow conditions.

As can be seen from the equation, the acceleration sensor output (as “PDF”) provides one piece of information as a function of two unknowns (GVF and the transport velocity of gas and liquid). 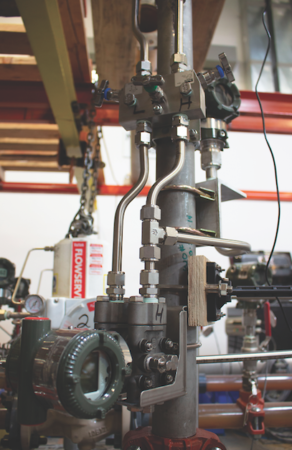 This problem has been overcome by executing a pair metering operation at two independent yet close positions of the movable conical-shaped plug – where the metering section is slightly adjusted by a known value, without altering the income gas-liquid flowrate and concentration; the modification of velocity, however small, being significant enough to be picked up by the acceleration sensor and counted by PDF 1,2 thereby producing meaningful inputs to the GLIMS data processing algorithms.

A general problem, for most of the successful multiphase metering technology today is the high CAPEX cost of the meter; cost that would restrict equipping wells producing less than 1000- 2000 BBD, in addition, (and particularly for wells under 1000 BBD), significant flowrate fluctuations may reduce the instrument accuracy under acceptable levels from an economic standpoint. In short:

The GLIMS apparatus is currently being tested at CG Industrial Specialties Ltd (CGIS) in their Control and Instrument Demonstrator (CID) in Vancouver, B.C. Future efforts to finalize GLIMS development will be to take the apparatus to an industry accepted testing and simulation facility (such as NEL in the U.K.), install it in the field, manufacture a base unit and develop further diversified models.

MPFMs are an increasingly valuable method of improving the management of oil and gas production facilities and are becoming available for a wider range of production rates. GLIMS is a promising game-changer due to its unique abilities to capture the real-time, accurate gas-liquid flow information, at reduced capital expenditure and operating costs.

3 New Concept for rapid transfer of novel technologies from laboratory to field, by P.Toma et al, in Pipeline and Gas J. July 2000.