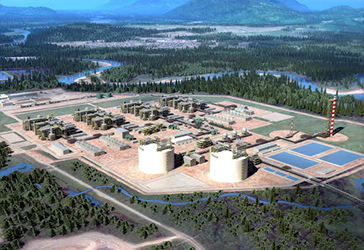 The federal government has earmarked $275 million into LNG Canada’s $40 billion liquefied natural gas project in Kitimat, BC. Finance Minister Bill Morneau made the announcement last month in Kitimat, announcing the $220 million will be directed toward buying energy-efficient gas turbines for the project, with the additional $55 million spent on replacing the Haisla Bridge in Kitimat, which is expected to see an increase in traffic.

“The Government of Canada is proud to support this historic $40 billion project that will get our resources to new markets,” said Morneau. (See video animation below.)

LNG Canada includes a liquefaction facility, a 670 kilometre pipeline from Dawson Creek and a marine terminal.

The project is said to represent the “largest private sector investment in Canadian history,” according to the federal government.