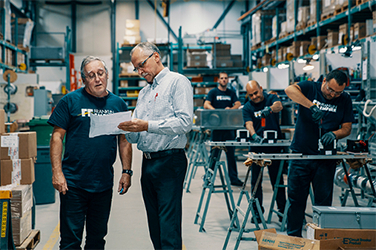 Franklin Empire is said to be the largest independently owned electrical distributor in Canada, with over 500 employees and an inventory investment exceeding $35 million. In Québec and Ontario, it has 23 branch locations and five assembly and repair shops.

Rittal is the world’s largest producer of enclosures, heating and cooling systems, power distribution and IT solutions as well as software, part of the Friedhelm Loh Group in Germany.

Andre Bousette, Rittal Systems director of sales, Eastern Canada, said, “We are delighted to partner with Franklin Empire in Quebec, so that our enclosure solutions will now be easily available through their multiple branches all over Quebec, in addition to their network in Ontario.

“We are confident that collaborating with Franklin Empire in Quebec will expand our reach to new areas and industries and will enable us to service our customers faster and better.”

Added François Béland, regional manager, Franklin Empire, “We are delighted to become a distributor partner of Rittal in Quebec as well as Ontario.

“Everything we do is customer-focused, and we are committed to developing and enhancing our expertise in new areas to offer the most innovative solutions quicker, to reduce costs and enhance productivity.  To that end, we know that Rittal’s extensive product line will complement offerings of our key suppliers and offer integrated solutions to the end customer.”