Saint-Gobain to invest $91 million in its Montreal gypsum plant 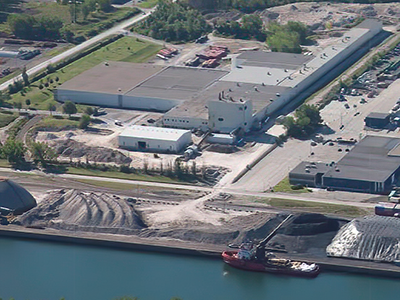 Gypsum board plant in Montreal suburb of Ville Sainte-Catherine.

Saint-Gobain, through its building products subsidiary CertainTeed Canada Inc., has announced plans to invest $91 million, including $40 million in grant money from the government of Quebec, via its EcoPerformance program, to upgrade equipment at its Montreal wallboard manufacturing facility.

The upgrade should reduce its carbon emissions by up to 44,000 metric tonnes/year, creating the first zero-carbon drywall plant in North America.

The reduction in emissions associated with the equipment upgrades at the plant is the equivalent of removing 9,500 cars from the road.

The equipment upgrades will also reduce the site’s energy usage by 30 percent, creating one of the most energy-efficient wallboard plants in the world, and the plant will transition away from using fossil fuels to solely being powered by renewable electricity from Hydro-Québec.

Additionally, the upgrades will increase the Montreal plant’s production capacity by up to 40 percent, allowing CertainTeed to deepen the company’s commitment to the construction industry in Quebec, Atlantic Canada and eastern Ontario.

The project comes as Saint-Gobain continues to roll out its new global Grow and Impact strategy, which includes plans to reduce the company’s energy consumption and emissions. The company has pledged to achieve carbon neutrality by 2050.

All of the production equipment at the Montreal plant that is currently powered by natural gas will be upgraded to newer equipment powered by renewably-sourced electricity.

These upgrades will allow the manufacturing operations at the plant to achieve carbon neutrality. Construction on the project is scheduled to begin in the summer of 2023 and the new equipment will come online in late 2024.