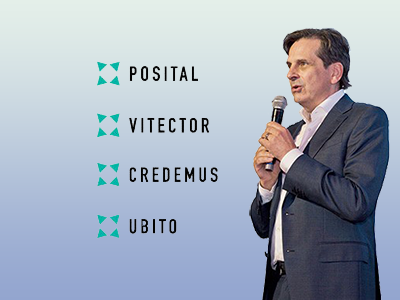 The international FRABA Group has announced the creation of two new business units: UBITO and CREDEMUS. Building on in-house innovations for the established POSITAL and VITECTOR businesses, these new enterprises will be active in new markets such as Digital Transformation and the Internet of Things.

The launch of these new businesses will be marked by new logos and branding for the Group.

UBITO offers components for magnetic sensing, energy harvesting and wireless transmission with roots in POSITAL’s pioneering use of Wiegand Technology in rotary encoders. Grounded in the success of more than 1 million devices worldwide and continued improvements, UBITO will take this technology to new markets such as Smart Metering, Internet of Things and Wireless Power Transmission.

The new business units and logos reflect a significant evolution of the FRABA group. Christian Leeser, the group’s CEO and majority shareholder, explains: “The old FRABA company, which had been founded in 1918, specialized in electromechanical devices and systems, largely based in relay technology.

“By 1993, when we acquired the company, modern semiconductor technology had made much of this obsolete and we faced the challenge of updating both the product line and the company culture.

“We created the VITECTOR business unit with innovative safety systems for commercial doors based on optical technology. POSITAL was created as a specialist manufacturer of position and motion sensors, building on the base of optical encoders we inherited from the old company.

The encoder market offered special opportunities and challenges. Leeser continues “Encoders are used in an enormous range of applications, requiring an equally enormous range of mechanical configurations and performance characteristics.”

In an earlier time, the company says, customized products were built individually by skilled craftsmen and a very experienced sales force was needed to guide customer towards a suitable product. FRABA’s new approach has been to create a production system that could deliver a huge range of products at mass-production cost levels.

Leeser continues: “We accomplished this in 2006 through a combination of modular product design and a comprehensive manufacturing control system built around a company-developed cloud computing infrastructure.”

It also includes millions of computer-generated datasheets offered via an online configuration and order tool that is easy to use, the company adds. Today, most orders originate online, setting in motion a made-to-order manufacturing process that can deliver finished products in a matter of days. It is this digital platform that will be offered to other mid-size manufacturing companies through the new CREDEMUS business unit.

The new logos introduced on July 1st to accompany the launch of the new enterprises feature a four-pointed star, symbolizing four guiding principles that Christian and Achim Leeser introduced in 1993.

FRABA products are available in Canada through Electromate.