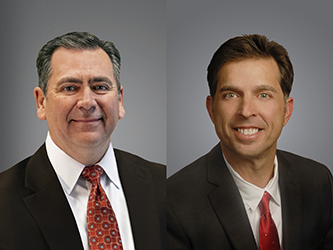 Motion Industries, Inc., a distributor of maintenance, repair, and operation replacement parts based in Birmingham, AL, has announced that its parent company, Genuine Parts Company (GPC), presented the 2018 GPC Manager of the Year honour jointly to two recipients. It is the single highest individual recognition in all of Genuine Parts Company.

“This is the 60th consecutive year that we have recognized one Manager of the Year out of all our associates worldwide,” said Paul Donahue, president & CEO of Genuine Parts Company. “This year we decided to present the Manager of the Year Award to both Randy and Kevin to recognize the outstanding efforts of both leaders, resulting in a record year during a challenging time with the passing of Tim Breen, former president & CEO, in August. This award is the highest honour at GPC – a significant recognition of both Randy’s and Kevin’s exceptional leadership of the Motion Team in 2018.”

Prior to being named Motion Industries President in December 2018, Breaux was executive vice president of Marketing, Distribution, Purchasing and Strategic Planning for the company, and has nearly four decades of experience in the industrial manufacturing and distribution markets. He joined Motion Industries in May 2011, following 21 years of leadership roles with ABB/Baldor Electric Company.

With annual sales of $6.3 billion, Motion Industries is an industrial parts distributor of bearings, mechanical power transmission, electrical and industrial automation, hydraulic and industrial hose, hydraulic and pneumatic components, industrial products, safety products, and material handling. Through EIS, which joined with Motion Industries to form its Electrical Specialties Group in 2018, the company has broadened its offerings with process materials, production supplies, specialty wire and cable, and value-added fabricated parts for the electrical OEM, motor repair and assembly markets.

Motion Industries has over 550 locations, including 15 distribution centers throughout North America and serves more than 190,000 customers from the food and beverage, pulp and paper, iron and steel, chemical, mining and aggregate, petrochemical, automotive, semiconductor, wood and lumber, medical, and pharmaceutical industries.