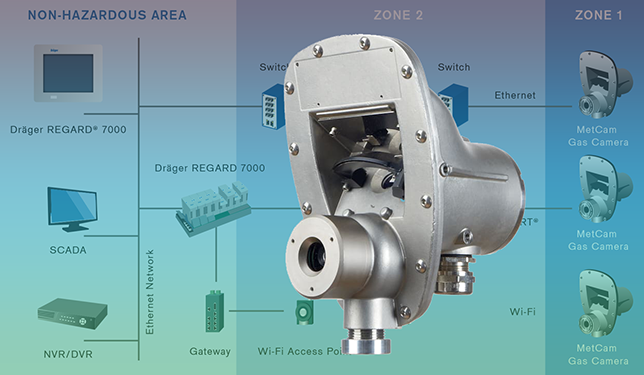 The MetCam is an explosion-proof gas camera from Draeger that continuously monitors large areas for hazardous methane leaks and fugitive emissions.

The gas camera device automatically quantifies the source and intensity of the leak using advanced algorithms and transmits alarms via analog 4 to 20 mA/HART or RS485 Modbus.

Visualization is via Ethernet or Wi-Fi. The camera automatically monitors a facility around the clock.

Unlike point detectors, the gas source need not be in the immediate proximity of the gas camera, the company says.

The source just needs to be in the field of view of the camera, which makes detection independent of wind or similar influences, it adds.

The unit is said to detect and alerts gas leaks at an early stage, providing time to react, increasing facility safety and efficiency.

The gas camera visualizes the gas cloud as a coloured overlay on the black-and-white video image and independently quantifies the concentration.

As a result, an event can be interpreted from a safe distance, such as, from a control room.

The device can also be used to measure emissions or as a surveillance camera with a colour image.