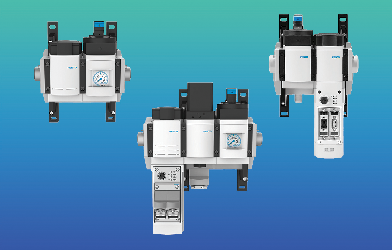 Festo has expanded its technology for energy conservation and early leak detection in pneumatic production with two more intelligent energy efficiency modules — the MSE6-C2M and MSE6-D2M.

The Festo units join the MSE6-E2M to form a comprehensive lineup of condition monitoring devices that are said to optimize compressed air usage during normal operations and halt or reduce consumption during scheduled stoppages as a further economy. They will pay for themselves in fairly short order, the company says.

The MSE6 series modules can be fully integrated into the machine’s control system via fieldbus nodes to cyclically exchange important energy consumption and availability data regarding production. That data can inform more targeted preventive maintenance practices, or for even bigger cost savings, a predictive maintenance program.

In the case of the -E2M, this data can be uploaded to the cloud via the Festo IoT gateway CPX-IOT and recorded and analyzed as long-term measured values to recognize consumption trends that can identify inefficiencies and deteriorating performance for possible remedial action.

The -C2M combines a pressure regulator, on/off valve, flow and pressure sensors and fieldbus communications (PROFINET, with more protocols to come) in one unit.

During non-production intervals, it shuts off the compressed air supply once production has stopped for a certain amount of time while maintaining sufficient pressure in the idling system for an immediate re-start.

While the system is in standby mode, the -C2M, like the -E2M and -D2M, will detect leaks by evaluating the rate of pressure drop.