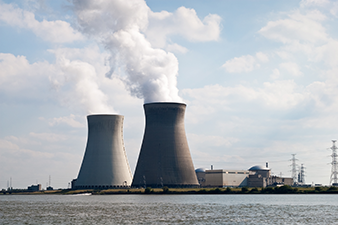 The nuclear power generating facility’s maintenance team planned to analyze a number of measurements, including vibration, pressure, and flow. They also wanted to perform electrical signature analysis as part of the pump performance assessment, so they contacted Bob Dunn at I & E Central; a company known for providing on-site predictive maintenance services as well as distributing industrial test equipment for predictive maintenance (PdM), electrical and reliability professionals. In January 2016, Dunn went to the nuclear power plant to perform the electrical signature analysis on two of the 350-horsepower, 480-volt motors. 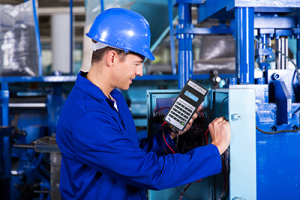 Electrical signature analysis is performed by connecting current sensors and voltage leads to the motor, and then capturing high resolution current and voltage waveforms, which can then be analyzed as FFTs as well as raw waveform data. The resulting data gives insight into the entire motor system, both mechanically and electrically, from the incoming power through the driven load. This technology actually uses the motor as a transducer for the mechanical analysis. Any mechanical phenomena will be modulated onto the current waveform where they can be detected and analyzed.

Dunn used the ALL-TEST Pro Online II energized motor testing instrument to perform the electrical signature analysis. He connected the ATPOL II to the system, which was set to a flow rate of 5600 GPM for the test. The motor terminal box was kept opened for the test, and the ATPOL II data collector was placed near the motor. The ATPOL II collected and transmitted the data via Bluetooth while Dunn and the maintenance team were positioned a safe distance away from the high voltage equipment.

A high frequency capture and FFT of both voltage and current which shows: 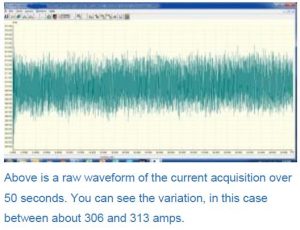 The motor was electrically perfect with balanced current and voltage, and 90+ power factor.

The motor and pump were mechanically excellent with no indications of misalignment or unbalance, bearing issues, rotor, or stator issues.

Tests showed a significant fluctuation in the current draw, pulsing at about 10 Hz. Dunn and the team collectively determined that this was caused by non-laminar flow, or turbulence in the system. 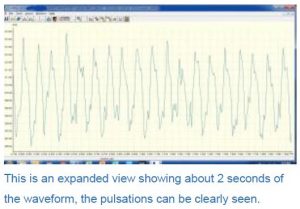 The indication of turbulence on the two under-performing vertical service water pumps was a revelation; and what was more surprising to the maintenance team was that the turbulence had not been detected with any of the other tests. It was only the Electrical Signature Analysis that had revealed the underlying cause of poor pump performance.

One of the key benefits of Electrical Signature Analysis is that it can show mechanical issues in the driven load – even in the case of this vertical pump with the impeller 30 feet below. This is in addition to detailed information on the entire system, both electrical and mechanical. 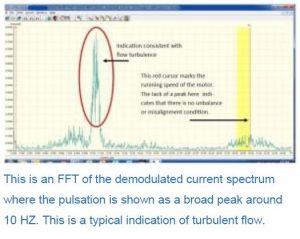 Once the maintenance team understood the root cause of the performance issues, they were able to take the necessary steps to remedy the situation and get the pumps operating to the nuclear power plant’s performance requirements.

Predictive maintenance is important. Monitoring your industrial equipment and evaluating performance issues before catastrophic failure occurs can save your operation from costly downtime and unwanted expenses.

If you are responsible for critical motor-driven assets, the ATPOL II™ is a powerful monitoring and diagnostic tool. As this case study shows, the ATPOL II™ is a great companion when taking vibration measurements. Performing Electrical Signature Analysis along with Vibration Analysis can provide a more in-depth look at what is really going on with your equipment. Making sure you have the proper tools to perform these kinds of analyses is critical to any Condition-Based Maintenance / Predictive Maintenance program.