When an application calls for surface finishing, cleaning, polishing, deburring, edge blending or removal of paint, rust or other contamination, a wheel brush is often the ideal solution. A type of power brush, wheel brushes are motor-driven and may feature an arbor hole or keyway that supports their use with grinding equipment or CNC machinery.
Wheel brushes are circular in shape with uniform distribution of the fill materials extending radially from the centre core to the periphery. When metal wire filaments are used, they are excellent tools for light deburring, edge blending and general surface finishing. The brushing action occurs at the edge or face of the tool on machined parts such as steel shafts, gears, turbine blades, or extrusion cut-offs.
However, when harder materials are involved, wire filaments can break off, or deform – even if crimped.  Although knotted wire options are available for more aggressive deburring, for today’s hardened steels and alloys even this type of wheel brush is not sufficient.
Instead, for the most aggressive deburring or surface finishing the solution is a wheel brush that utilizes abrasive nylon filaments made of silicon carbide. Taking it one step further, diamond grit can be used for the hardest metals and alloys in use today.
The construction of these composite hub radial wheel brushes, as they are called, provides a long-lasting wheel with less filament breakage and superior performance.
For JR Precision & Welding, a machine shop in Houston, Texas, the issue of removing large burrs from machined holes in an extremely hard 4140 steel alloy part used as a muzzle brake for firearms was proving a challenge.  Founded in 2017, the machine shop specializes in three and five-axis CNC manufacturing, 3D printing and welding.
A muzzle brake, or compensator, is a device connected to the barrel of a rifle or pistol to help control recoil and the rising of the barrel that normally occurs after firing.
There are different forms of muzzle brakes, but most consist of a small length of tubing approximately five-centimetres long.  Muzzle brakes utilize slots, vents, holes, baffles and similar devices to redirect a portion of propellant gases to counter recoil and unwanted muzzle rise.
Where and how these holes are placed in the muzzle brake has a tremendous effect on the influence of the brake in terms of recoil and muzzle movement.
However, when machining these holes, large burrs were forming at the oval-shaped gas ports.  The cylinder was made of 4140 steel, which is a one per cent chromium – molybdenum steel alloy that is generally hardened and tempered to a tensile strength of 850-1000 Mpa.
The company was machining the part on a five-axis machine in an elliptical path, which increased the size of the burrs created.
“The burrs that were created were razor sharp and thicker than we wanted them to be on each of the four main ports in the part,” says James Mawazeb, Director of operations and lead engineer at JR Precision & Welding.
This led him to reach out to a local tooling representative from Bass Tool & Supply, a leading supplier of CNC machine tools, for wheel brush options to remove the burrs in one automated operation.  The rep, in turn, suggested he contact Los Angeles-based Brush Research Manufacturing.
The company is known for inventing the Flex-Hone, a tool characterized by abrasive globules that are permanently mounted to flexible filaments that are attached to a centre shaft.  With its low-pressure, low-temperature abrading process, the Flex-Hone tool can remove work-hardened layers and deburr parts without disturbing the underlying metallurgical structure. 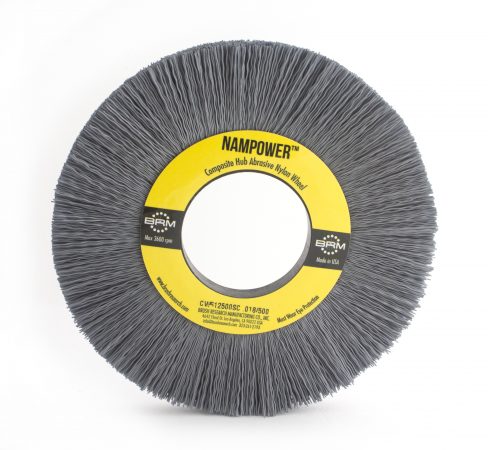 However, Brush Research also manufactures a wide array of wheel, cup and end brushes in a variety of sizes, filaments and grits.
Still, based on the geometry, location of the burrs and the hardness of the metal alloy, it wasn’t immediately clear what the best solution would be.  So, the engineers at Brush Research suggested Mawazeb send in several sample parts for testing in the lab.
At its surface finishing laboratory in Los Angeles, Brush Research engineers analyze customer parts that require finishing, then selects and tests the tools that will provide the best solution according to customer operating parameters.
At first, the company attempted to remove the large burrs using NamPower abrasive disc brushes.  Composed of flexible abrasive nylon filaments bonded to a fiber reinforced thermoplastic base, the disc brushes contain a unique combination of both ceramic and silicon carbide abrasive. The abrasive filaments work like flexible files, conforming to part contours, wiping and filing across part edges and surfaces to deliver maximum burr removal rates.
Although an excellent tool, the abrasive disc brushes were not sufficient removing the burrs.
“After testing out disc brush with different depths and speeds, we decided to try an abrasive nylon wheel brush,” says Elysha Cole, product support specialist at Brush Research. “It was able to easily get into the slots, push the burrs out and remove them.”
The abrasive-filled nylon filaments are set into molded cores, allowing higher filament densities and putting more cutting tips at the point of attack.  In addition, the filaments are extremely durable and self-sharpening, providing excellent performance and wear life.  As the brushes come in contact with the work surface, the filament grit wears off, exposing new cutting particles.  In that manner the brush continues to be sharp even after repeated use.
In addition, unlike the bristles of metal brushes the abrasive nylon fibres are not prone to deforming or breaking off like wire brushes.
The product utilized to prove the concept was a six-inch diameter tool with silicon carbide filaments. Because the burrs were a bit heavier and the customer was not concerned about the final surface finish, the machine shop opted for 80 grit. The tool can be automated on CNC equipment or offline as a secondary deburring operation.
According to Mawazeb, the abrasive nylon brush met all his requirements, including how well it fit in his five-axis machine’s magazine holder and existing toolholders.
However, the primary concern was how much material the brush would remove.
“We didn’t want the brush to affect the outer diameter measurements in a way that affected the performance of the ports,” says Mawazeb.

After testing the abrasive nylon brush, Mawazeb says he was impressed. In addition to removing the large burrs, the brush also provided a soft edge break to the four ports so they were not razor sharp without affecting the surface finish.
“The abrasive nylon brush removes just the right amount of material,” says Mawazeb.  “The surface finish actually matched what the customer wanted as well.”
After proving the concept in the lab, JR Precision & Welding ultimately decided to purchase a smaller three-inch diameter version of the wheel brush.  The shorter trim fill has less give, so delivers an even more aggressive action.
Mawazeb says he also tried another brush from another supplier, but was not impressed.  The filaments were angled down and the fill was not as compact as the abrasive nylon wheel brush from Brush Research.
“I tried another brush, but didn’t like how it performed.  When it would go over the part, it would be like it was a toothbrush, just rubbing over metal.  So, it didn’t actually remove anything.  It actually scuffed up the part more and left a horrible finish,” explains Mawazeb.
According to Mawazeb, the machine shop has installed the abrasive nylon brushes and the equipment is programmed for the next order muzzle breaks scheduled for production in the next month.
www.brushresearch.com
Print this page