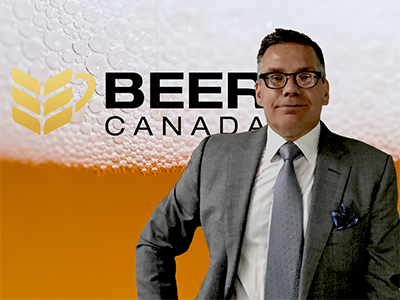 The board of directors for Toronto-based Beer Canada has appointed CJ Hélie, an experienced beverage alcohol executive, as the association’s new president. Beer Canada is the national trade association representing Canada’s leading brewers and has recently been restructured and now brings together Canada’s National Brewers and l’Association des brasseurs du Québec within the Beer Canada umbrella to form one fully integrated national voice for Beer in Canada.

“CJ is uniquely qualified to lead Beer Canada at this critical time for the Canadian beer industry, bringing a wealth of experience in beverage alcohol policy and advocacy at the international, federal and provincial levels,” said Kyle Norrington, president of Labatt Breweries of Canada and chair of Beer Canada.

“We wish to also thank interim president, Luke Chapman, for his leadership during the Association’s transition.”

Hélie stated, “I’m thrilled to return to the Canadian beer industry, to provide a compelling voice for beer lovers across Canada, with a strong focus on social responsibility and smart regulation.”

“I look forward to working with our member companies to establish a tax and regulatory framework across Canada that ensures a sustainable and growing domestic beer manufacturing sector for Canadian farmers, hospitality workers, alcohol retailers and adult consumers,” Hélie added.

Beer Canada has represented Canadian brewers since 1943 and offers statistical overviews of monthly and annual trends in the beer industry.