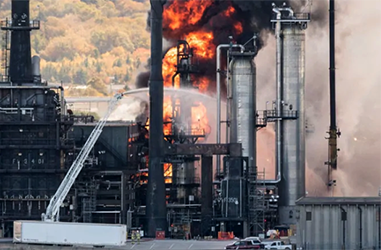 Irving Oil and Saint John Emergency Measures Organization officials have said four workers were treated at the Saint John Regional Hospital for minor injuries after an explosion at the Saint John, NB, Irving refinery on October 8, according to the CBC. Flames were sent shooting an estimated 30 metres high and left a plume of black smoke billowing over the city’s east side for hours.

One report said the hospital treated five people for non-life-threatening injuries that day.

WorksafeNB’s assistant director Eric Brideau, who visited the site the day after the blast and met with employees, said he could not confirm the total number of workers injured.

The cause of the explosion has not yet been determined, but officials believe it stemmed from a malfunction in the unit that removes sulphur from diesel.
Brideau described the investigation as “technical and complex.” He expects it will take two to three months to complete.

The Irving Oil refinery is the largest in Canada. It employs about 1,400 people and is capable of producing more than 320,000 barrels per day at the sprawling site, which covers more than 300 hectares.

Close to 3,000 people were working at the time of the holiday Thanksgiving explosion because of a massive turnaround maintenance project that’s underway. About 100 of them were the normal operations crew, while the rest were contracted tradespeople from across New Brunswick and other provinces.